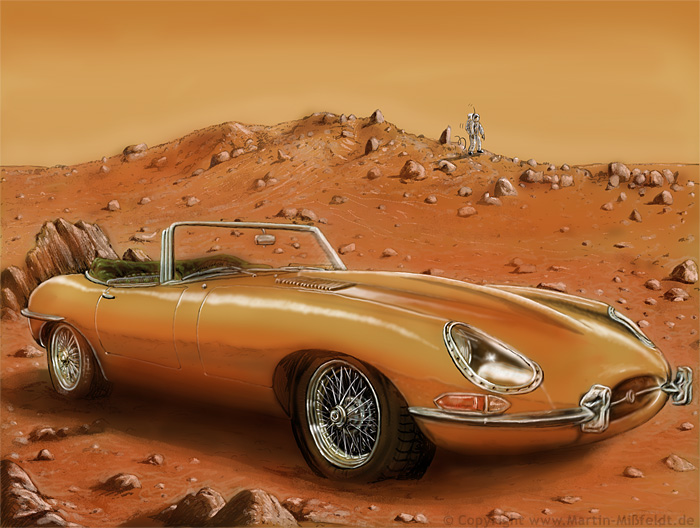 The digitally painted picture shows a Jaguar E-Type made of pure gold. It stands on the red planet Mars. In the background you can see the owner, an eccentric American millionaire. He is looking for the pool ...

About the Jaguar E-Type

The Jaguar E-Type (in the USA: Jaguar XK-E) was a sports car model of the English car manufacturer Jaguar. It was presented at the Geneva Motor Show on 15 March 1961 as a descendant of the successful Jaguar D-Type racing car.

The six-cylinder in-line engine with 3781 cm³ and 265 bhp/269 hp (197.6 kW) corresponded to that of the XK 150 S 3.8 litre. In addition to its high performance, the design developed by Malcolm Sayer was considered particularly exciting. The E-Type was sold with great success especially in the USA. The tubular steel frame under the bonnet carried the engine and front suspension and was bolted to the spray wall with the otherwise self-supporting all-steel body. Jaguar thus continued on the path taken with the Jaguar D-Type.

The rear axle was driven by a four-speed manual transmission. Revolutionary for the traditionally conservative British automotive industry was the rear independent suspension in its own subframe with a trailing arm and two suspension struts as well as wishbones on each wheel, with the drive shafts as upper wishbones. The design proved to be extremely successful in terms of handling, comfort and appearance and was used until 1996. The E-Type reached a top speed of nearly 240 km/h. It was available as a two- and 2+2-seater coupé (Fixed-Head Coupé) and as a two-seater roadster (OTS or Open Two Seater).

Besides the "Golden Jaguar on Mars" Mißfeldt painted another jaguar: the red "jaguar in front of the casino of Monaco". This is the Jaguar model XK 140. 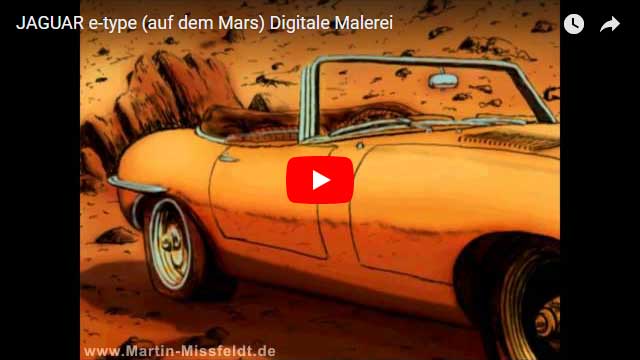