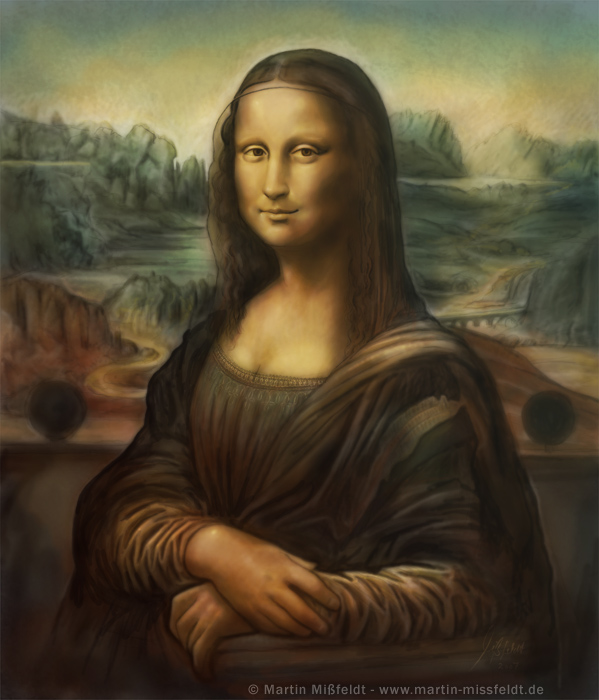 This picture shows a digitally painted copy of the Mona Lisa. It was painted with Adobe Photoshop on the PC. The "Original Mona-Lisa" was painted by Leonardo da Vinci. His world-famous masterpiece shows a woman with a mysterious smile.

In Wikipedia the picture is described as follows: "The young woman [Lisa was about 24 in 1503] in the picture is sitting in a chair on a balcony in front of a strange landscape. The armrest of the chair, like its torso, is positioned parallel to the image plane. The face is turned towards the observer, the eyes pointing to the left seem to look at him [very unusual for the representation at that time]. She has full cheeks, a broad forehead and no (!) eyebrows. The left corner of the mouth of the closed mouth indicates a smile. The left hand embraces the left armrest, and the slender fingers of the right rest gracefully on the left. On her hair lies a fine, transparent veil, her dress falls in simple folds, she has put her coat over her left shoulder ." Source: "Wikipedia: Mona Lisa"

Who is the portrayed? Who is Mona Lisa?

One reason for the celebrity is certainly that it has not been possible to identify the depicted person without any doubt. The first assignment was made by Giorgio Vasari, the great Italian chronicler of Italian art history. He called the picture "Lisa del Gioconda" (in Italian the picture is called accordingly: "La Gioconda", French: "La Gioconda"). "la Joconde"). If Vasari is right - and basically there is nothing against it - then the Mona Lisa would be the third wife of the Florentine merchant Francesco di Bartolomeo di Zanobi del Giocondo.

Further identification variants can also be found summarized in Wikipedia: "Since only Vasari mentions the name Mona Lisa (Mona or Monna, abbreviation for it. Madonna = "woman"), numerous historians have doubted its correctness and searched for other tracks. For example, it is claimed that it could be the favourite of Giuliano I de Medici, a certain Pacificia Brandano or one of the mistresses of Charles d'Amboise, or Isabella d'Este, the Marquise of Mantua. Some researchers assume that there was no model at all, but that Leonardo painted an ideal woman. Some also notice that the Mona Lisa looks similar to the self-portrait of her creator, so he painted himself. In this context, however, it would be much more probable that Leonardo painted his mother."

The identification of the Mona Lisa has inspired generations of art scholars. There are numerous versions of who the smiling lady might be. For example, she could be the wife of the Duke of Aragon with bourgeois name "Isabella of Aragon". Both Leonardo da Vinci and Isabella lived in Milan in the 1490s. Another theory is that it could be Leonardo's young beloved Andrea Salaino Florentine, and that Vasari would have made it from Mon Salai to Mona Lisa.

You see: The picture or the "Mona Lisa" offers an almost inexhaustible potential for interpretation. The imagination and inventiveness of the performers is simply put into Leonardo's shoes. He could have meant... Leonardo was a genius - so why simply, even if it can be complicated? In this "Mona Lisa cartoon", for example, she is depicted as a giraffe (here the corresponding "self-portrait da Vincis", also as a giraffe cartoon)

Inconceivable what you can read from a picture. Wikipedia means that the image effect is created by a "technical trick. Leonardo chose two different perspectives (?) for the eyes, whereby the Mona Lisa gets her incomprehensible silver vision. Furthermore, it is noticeable that the Mona Lisa has no eyebrows. According to new scientific studies on painting techniques, however, it cannot be concluded that the Mona Lisa was painted without eyebrows. Apparently they did exist, but over time they have faded beyond recognition.

Madness, right? The only problem is: the picture loses its aesthetic appeal as a picture in such an art-scientific dissection, it becomes a pure riddle. And this is precisely the trick: Leonardo - like many artists after him - left behind visual puzzles that challenge the ambitious intellect. And as a work of art, especially by a supposed genius, it offers an infinite projection surface for one's own imagination. The Mona Lisa is not only an enraptured little angel, she is also an art crossword...

The Mona Lisa in 3 minutes

The picture shown above is a speed painting. It shows the painting process of a digital copy in a three-minute video. The digital painting with Photoshop and Grafiktablet took about 3 hours. The video shows this process as time-lapse. More about Speedpaintings by Martin Mißfeldt.

Leonardo was a universal genius. His greatest achievements are now attributed to him as an artist. Beside the Mona Lisa he left behind works like the "Holy Anna Selbdritt", the "Last Supper" or world famous drawings and sketches. It is astonishing that, according to his notes, he did not value these artistic abilities so highly. For example, he seriously applied for the post of "court singer". 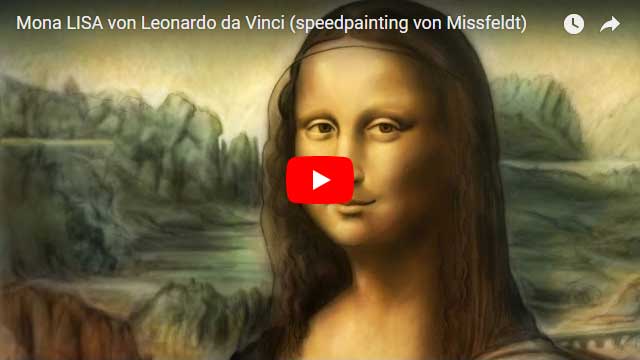 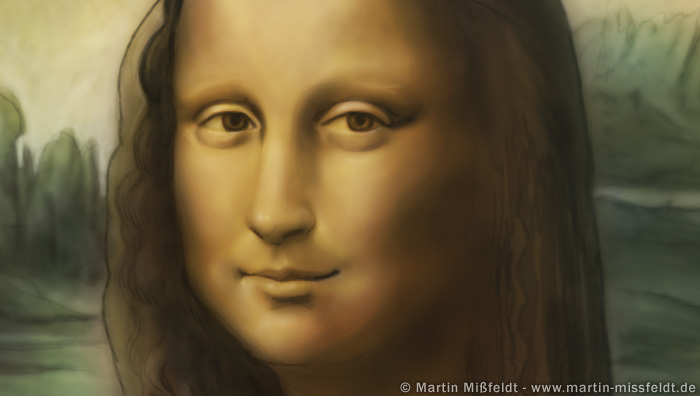