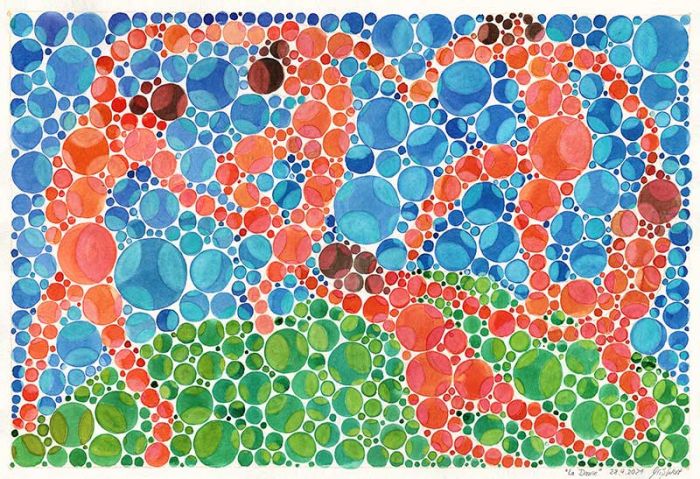 This watercolor painting shows five dancing figures. They turn in a circle, the image radiates dynamism, movement, music and joie de vivre. The model comes from the French Fauvist Henri Matisse, whose paintings I love very much. While Matisse expressed his movement mainly through lines and surfaces, I have tried to emphasize the color. In doing so, I make use of colored dots, which in my case come from the context of eye test images, i.e. medical color charts for testing color vision.

The image failed as a workflow. Originally, there was supposed to be just one layer of colored dots, but when I was done with it, the result was sobering: it was far too dark and static for me. So I took off Fareb again, which can be done with watercolor with some effort. Since gum arabic (the pictorial agent for the pigments) dissolves again when re-wetted with water, I was able to partially remove the paint again. This then looked like a second layer with milky, light dots. Since this then again seemed too pale to me, I finally painted these milky light areas again with watercolor - whereby I have deliberately chosen a slightly different shade.

I am satisfied with the result so far. It conveys exactly this kind of rhythm and joie de vivre that I had in mind. And the Erfekt that the effect of the image changes significantly by the viewer distance, fascinates me still. Up close, you just see confusing colored dots, with no overarching motif to discern. But the further away you get, the more everything comes together to form a dancing group of people. You feel the passion, the movement and the music all the more as you walk back and forth ...

I also painted this watercolor on camera. For this I now primarily use Twitch. The viewers there can also ask me questions while I'm working. This forces me to reflect on the work process and clarify my motives. The following video shows an excerpt from this video, in which I also explain why I had not painted for so long and why I basically do not care about the current art. 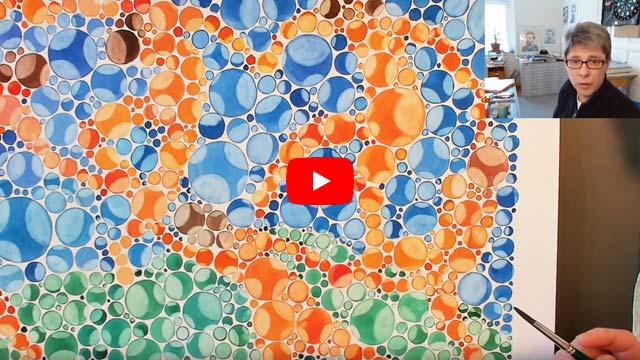 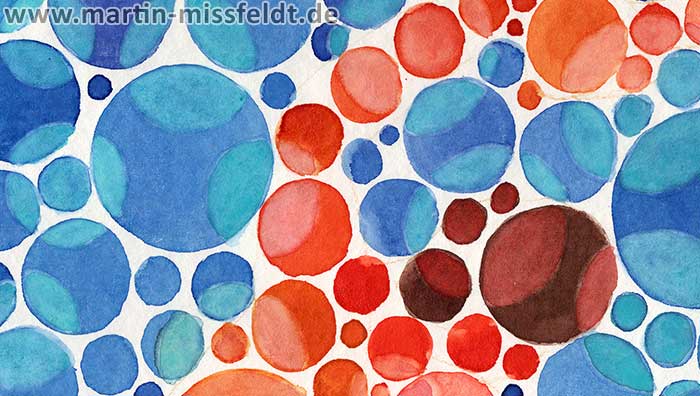