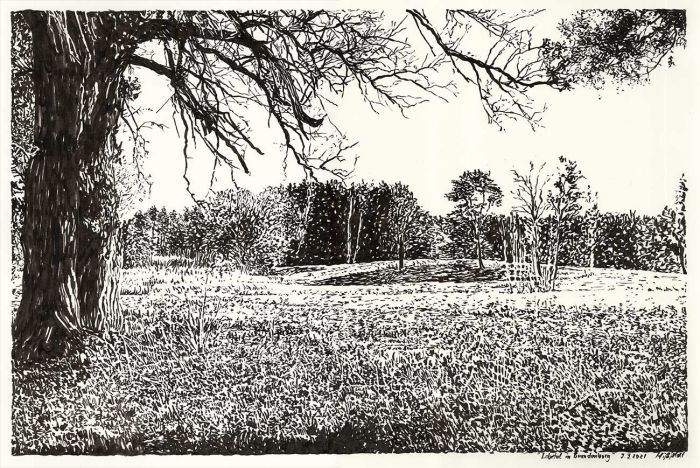 This drawing shows a region a landscape in the Lobetal near Bernau in Brandenburg. After a first attempt (landscape near Chorin Monastery) in April 2021, I have now turned again to this black and white technique to paint or draw a series with motifs from the state of Brandenburg.

The background for this series is a micro-scholarship of the state of Brandenburg, which serves as a kind of "Corona bridging aid". I had applied for it - and also received it a few days later. In the project application, which was part of it, I formulated this idea with pictures from my surroundings.

However, I had imagined it differently. Actually, I wanted to paint my surroundings - the state of Brandenburg - in color. I had bought myself a suitcase easel especially for this, in order to paint directly in front of nature. Only unfortunately: it did not go! For weeks I had searched for motives. I drove through ide area and have observed everything possible: People, cars, houses, landscapes. Only unfortunately: none of it resulted in an exciting picture for me. It would have become - in color - completely uninteresting, boring pictures. Why that was and is: no idea! But I can not paint my Brandenburg surrounding area in color.

More out of necessity, I then drew again with the brush pen. As templates I took one of the many photos that I had taken in the weeks before. And what can I say: in black and white it works! The drawing have this clear, cool hardness that I have in mind. No compromise, either or, hard contrasts!

A brush pen is a wonderful tool! The brush tip is similar to a traditional round brush, but you don't have to constantly interrupt your work process to dip into new ink. Instead, like a fountain pen, the brush pen has an ink cartridge over which the black ink flows into the tip without interruption. 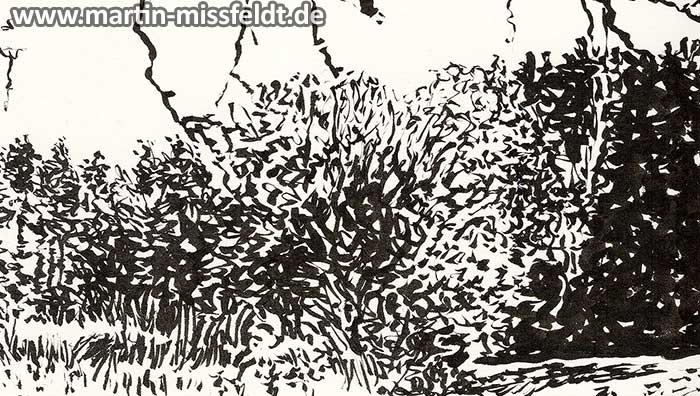