Drawing perspectives - how does that work? A tutorial by Martin Missfeldt

What is (art) perspective?

In 1436 the Italian artist and universal scholar Leon Batista Alberti wrote the treatise "De Pittura" (on the art of painting). It contains the first theoretical treatise of modern times on perspective. Alberti describes that perspective is comparable to a "window view". A perspective image is like the image of a section through the pyramid of vision. The top of this pyramid of vision lies in the eye, from which the view is directed towards the world in the shape of a pyramid. Even the Greeks and Romans knew a perspective construction ("angle perspective"), which can be seen in old wall paintings, which were about an implied spatial illusion. See also: Art historical development of perspective

Perspective is an artistic (technical) construction process that serves to illuse our three-dimensional visual experience on a two-dimensional image carrier. The perspective always refers to the entire picture, not just to the shortening of individual parts of the picture.

Besides Alberti many other artists like Filippo Brunelleschi, Piero della Francesca or Albrecht Dürer were pioneers in the field of perspective. More about this in the second part about the history of perspective as an artistic form. With the help of perspective one can paint or draw pictures that resemble what the human eye sees. The knowledge of perspective drawing is thus the basis for realistic drawing and painting.

Eye and visual way:
How an image reaches the brain.

In order to understand how perspective works, one must first understand how human vision works. For simplicity's sake, let's assume you have only one eye (like a cyclops). All visual information of this world would then penetrate through the lens (pupil) into the eye. This creates a mirror image of the visual world on the back of the retina. This image is converted into electrical impulses by photoreceptors so that it can be further processed in the Gehrin. But that's another topic (some oil paintings).

What is decisive about this introduction is the following: the light reflected by the objects falls into our eyes as straight as a candle. Not crooked and crooked, but straight as a die!
These straight lines, which hit our eyes from the depth of space, are simulated in the perspective construction or drawn as auxiliary lines.

Seeing in itself is a bit more complicated, especially when you consider that we have two eyes sitting next to each other. This "stereocopic vision" (from two slightly different perspectives) allows us to see the world spatially. (Btw: this is also the reason why you see twice when you're drunk). But that's not really important here, because the perspective construction always simulates the impression an eye has.

Viewer and horizon
(from above)

Although our earth is a sphere, it is so large that the horizon of the sea always looks like a straight line. At least as long as we move on earth (which is what a down-to-earth artist does). Where hills or mountains or trees cover this horizon, you have to think about it.

The horizon line is the line that visually ends the ground on which we stand. All construction principles related to the floor end in the horizon line. You can also put it this way: the floor is the two-dimensional underground, and everything we want to draw three-dimensionally must somehow be related to this underground. So before we go into space, we must first be able to control the ground.

If you now look straight ahead from your current point of view, then the point at which this axis of view meets the horizon is the vanishing point of the central perspective. Parallel lines in space always run towards a common vanishing point.

The horizon line is the axis, on which all vanishing points, which have to do with the underground, are located. Since almost everything is somehow connected to the floor due to gravity, this basic understanding is of enormous importance. One could also formulate it flappig: a flying bird does not need a vanishing point on the horizon - it follows other laws.

The following example illustrates what has been said so far: the vanishing lines run from the depth towards the vanishing point - and the distance to each other widens. First of all, only the base area on the ground is drawn:

Figure 4 shows how the alignment lines can be distributed regularly: simply draw auxiliary points in the foreground whose distances are identical. With this we have defined the base area.

The conquest of space

If you want a body to appear three-dimensional, you just have to draw the upper boundary in front, then draw the alignment line from there, and then find the one behind the boundary. The following figure illustrates this:

Perspective drawing (2): construction of the room (above the floor plan)

But what if the object you want to draw in perspective does not run parallel to your own stand line? What if you look at the corner or front edge of a rectangular object? Then there are not one, but two vanishing points. Again, we first look at the floor plan, i.e. the two-dimensional floor. If you have two vanishing points, you need a lot of space left and right for the construction of the vanishing lines:

Tip: Since the construction of a two escape point perspective usually requires much more space than is necessary for the desired image, it is advisable to create two additional sheets of paper on the right and left and, if necessary, to fix them with small adhesive strips (on the back). Instead of a very long lineal, you can also use a straight (cleanly sawn) wooden strip, which you can get at any DIY store.

What's the height of the horizon? This question has a considerable influence on the effect of an image. There are basically three forms of perspective:

What do we do now? Perspective drawing from rough to fine...

And now, will some people ask themselves? Constructing a simple box is simple, but how is it to draw the Cathedral of Rouen in perspective? Well, in principle the same. The secret is that you can refine this kind of construction more and more. You can add more boxes or separate pieces. Attached parts may have different vanishing points if they are not perpendicular to the main box and so on.

Finally, a completely absurd undertaking: a perspective co-construction of a sphere. This, of course, is illogical from the beginning, because a sphere has neither corners nor edges. It is therefore impossible to construct it in perspective, at least when it comes to the body itself. I have done it nevertheless :-) 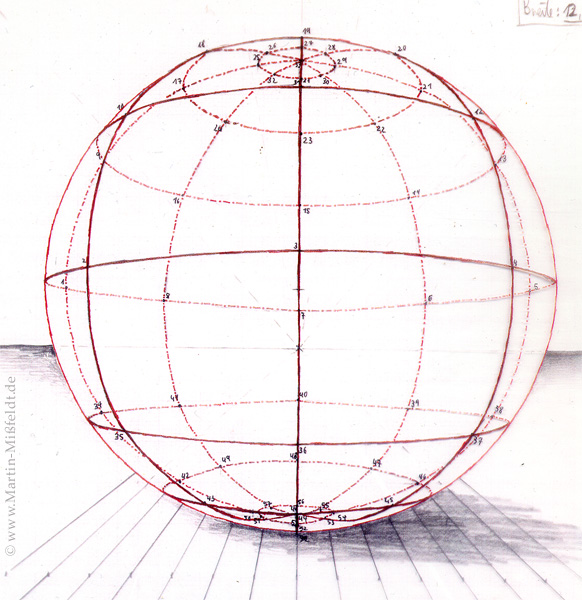