Advantages and disadvantages of a portable easel

A portable easel (also "acadamy easel") is a three-legged easel made of wood. It serves to hold the canvas (the picture carrier) in a vertical position. This makes it much easier to paint straight large pictures, because you can paint in an upright position (whether standing or sitting, does not matter). In principle, a three-legged portable easel is not as heavy and stable as a studio easel, which has a better stability due to a massive foot. Nevertheless, the portable easel is also suitable for larger image formats (up to approx. 150 x 150 cm). The main features of a portable easel:

Buy a portable easel - what to consider?

There are a number of differences between the models. To judge which easel is best suited for your purposes, here is a list of points to consider when buying a portable easel:

Learn more about the difference between easel types.

Usually an easel is made of wood, but recently it has also been made of aluminium or other metal. There are a number of different easel types that have different advantages and disadvantages. The decision which easel is the right one usually depends on individual factors. This article is intended to help you find the right easel.

How to construct an easel by yourself

If you don't have the necessary small change to buy a suitable easel, you can make a simple portable easel yourself relatively easily and inexpensively. The following video shows how this works - it's german but you might understand how to build it. 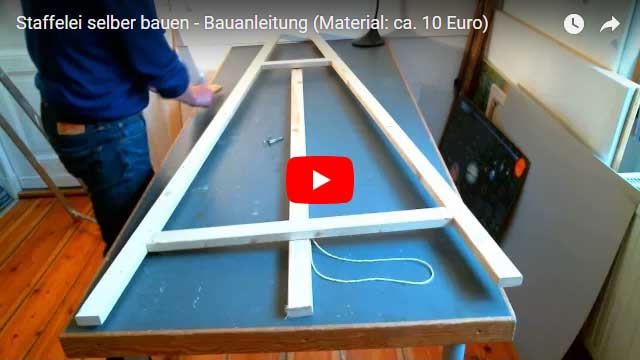 A detailed and well-illustrated manual can be found on the Künstlerbedarf-Blog (german): Build your own easel (incl. PDF instructions)